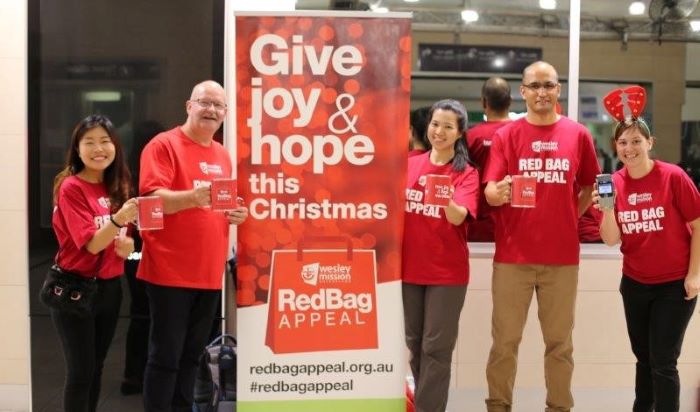 With almost 700,000 Queenslanders living in poverty and 365,000 living on Jobseeker or youth allowance payments, Wesley Mission Queensland has set out to distribute a quarter of a million dollars’ worth of food relief leading up to Christmas.

Wesley Mission Queensland has launched its annual Red Bag Appeal to deliver some much-needed festive cheer to families doing it tough as a result of the COVID-19 pandemic.

General Manager of Fundraising Paul Reis said many families who were previously financially secure would be wondering how to put food on the table this Christmas.

“We believe demand is going to be stronger than ever,” Mr Reis said.

“And it’s not just locals who need a helping hand. We’ve noticed an increase in overseas students living in Brisbane who are accessing our services because they don’t qualify for government assistance and can’t return home.

“We are asking anyone who’s still working and doing ok to think of those who have been hit hard by this year of upheaval and heartache.”

“There are tens of thousands of residents who could never have imagined they would be in this position, but the pandemic has had a terrible impact on so many families lives,” Mrs Schrinner said.

“We can’t underestimate the difference this simple act of filling a Red Bag with food will make to the lives of struggling families this Christmas,” Mrs Schrinner said.

“It’s as simple as buying a bit extra at the supermarket and filling a Red Bag with all the things that make Christmas special,” Mrs Schrinner said.

“Then you just drop it into a National Storage depot – the locations can be found at redbagappeal.org.au.

“Alternatively, you can donate online with $50 covering the cost to fill a Red Bag.”

“I support the Red Bag appeal because I have been in a very privileged position to celebrate the Christmas holiday period with presents, delicious food and happiness and I believe that everyone deserves the chance to do the same,” he said.

The appeal runs from October 28 until November 29.

Get a Red Bag to fill or find out more at redbagappeal.org.au.